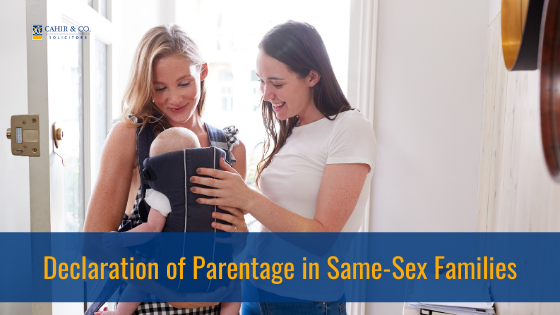 Declaration of Parentage in Same-Sex Families

The changes in our world brought about by COVID19 have meant that the vast majority of us have had time to take stock and to evaluate what is most important to us in our lives. Family and home life have always been cherished by the people of Ireland but the Irish family has changed in recent years and continues to do so.

We have grown and developed as a nation, one-parent families, blended families, same-sex families are now the societal norm but unfortunately, our laws have often lagged behind, failing to protect the members of Ireland’s newest families.

Progress is being made, however, and the coming into operation of Parts 2 and 3 of the Family Relationships Act, 2015 on the 4th of May 2020 heralds welcome protection and recognition of the rights of children born with the aid of donor assisted human reproduction which covers not only children born to heterosexual couples but also certain same-sex couples.

For years now the LGBTQ+ community in Ireland have been calling for equal legal rights to their children. Up until the 4th of May 2020, only one parent of a donor assisted child born to a same-sex couple could be named on their child’s birth certificate. This did not just undermine and stigmatise the validity and importance of the child’s parentage but also caused a host of problems as the child was not legally connected to both parents.

For example, if the same-sex couple wished to apply for a passport for their child, the biological same-sex parent had to sign an affidavit stating that they were a lone parent. More importantly, the lack of a legal connection to one parent could prove perilous in the event of the bereavement of a parent or access to medical treatment for a child when in the care of the non-biological parent.

Other sections of 2015 which were commenced and came into operation earlier, introduced some rights for same-sex families such as the right to apply for guardianship to non-biological parents in certain relationships, however, provisions in the Act to allow non-biological parents of children born through IVF to be legally recognised have only now come into operation.

As and from the 4th of May 2020, certain same-sex female couples may now be legally recognised as co-parents of their children. Same-sex female couples who conceived a child in a fertility clinic can both be named as legal parents on their child’s birth certificate. There are two different scenarios depending upon the date of conception of the child. For a child conceived through assisted reproduction before the 4th of May 2020 a Declaration of Parentage from the Courts will be required. This application for a Declaration of Parentage can be brought in the District Court where there is no dispute between the parents or in the Circuit Court where a joint application is not possible. Once a Declaration of Parentage is granted by the Court, it is possible to apply to re-register a child’s birth so that both parents are named on the Birth Certificate.

Whilst the legislation goes a certain way in recognising and protecting the rights of some LGBTQ+ families it leaves many out in the cold. It does not cover children born to same-sex couples through surrogacy, reciprocal IVF(“shared motherhood”), two male parents or through at home insemination for example. The result being that many children will not be treated equally simply because of how they were conceived. It is clear that although progress is being made we still have a long way to go in order to ensure that the children of all families in Ireland are treated equally.

If you would like further information on the above, contact me at Cahir & Co Solicitors. It is vital to get expert advice that is current in these uncertain times.